The curtailment of industrial power consumption to achieve financial benefits. 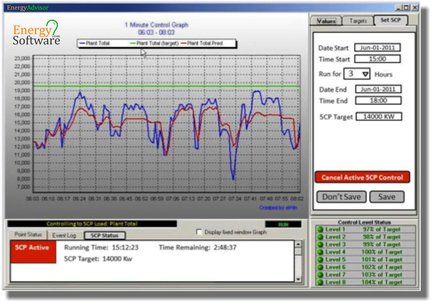 Real time 1 minute updates
The ability to curtail your facility's electrical load has traditionally resulting in savings on the peak demand portion of the electricity bill.
Demand management is still important today, but how it's activated and where the savings come from has changed.  Back in the 80's and 90's it was all about preventing demand spikes that would occur for a short period of time and result in huge demand charges on the power bill. Although this is still the primary reason for demand management in some parts of the world, in North America the reasons for curtailing load have more to do with managing the power distribution system than the individual power user.

​These days, incentives to manage demand come in the way of Demand Response (DR) and dispatchable load programs. Typically, the utility or electricity market operator would like the customer to reduce load when they (the operator) needs to manage the balance between generation and the demand for electricity on the system.  By allowing customers to opt into DR and Dispatch programs in exchange for financial incentives, the system operator then knows exactly how much load is available for curtailment on the distribution system and all they have to do is issue a demand response activation to reduce load on the system.

Of course it's up to the power consumer to manage their curtailment and ensure compliance.  The Energy Advisor Load Control Module allows power users to choose exactly how they curtail their loads.  Versatility is important, so our software allows for a variety of curtailment strategies that can be "activated" based on a variety of scenarios including DR activation, dispatch request, electricity price points, demand level or power system peaks (5CP/ICI).

By selecting various loads to curtail when necessary and the order that they are to be curtailed, the software knows just how much load is available for shedding on each of the available priority levels. Of course you may have a variety of strategies based on whether you are curtailing due to a demand response activation, high electricity prices or for some other reason.  Since compliance is a big issue for DR and Dispatch programs, the way in which you curtail your load under these scenarios may be much more aggressive than if doing so based on price spikes or demand management purposes.  That's why the software gives the user the capability to configure multiple control strategies and then implement them when required.

Control "signals" indicating that curtailment is required can be sent to a variety of third party equipment including data base flagging (SQL/Pi), smart meters, PLCs via Modbus and DCS systems via OPC interface.  Basically, our software indicates when you need to curtail and how aggressively to curtail.  The implementation of the curtailment is then done through existing facility systems which may include DCS,PLCs etc.

Below is a description of how the load control module may be used to meet the needs of demand management, DR activations, dispatchable loads and coincident peak management whereby the customer benefits from reducing demand when the power distribution peaks are high, this include PMLs 5CP and the Ontario Industrial Conservation Initiative (ICI).
​​

At 99% of the target, even more load would be curtailed (priority 3) in order to curb the demand even more and avoid exceeding the set demand target.  Of course the percentages at which each priority is activated and which loads are associated to each priority level are the choice of the user.  Demand targets may also change throughout the day for on/off/mid peak periods (or for any other reason) and multiple control strategies can also be activated, meaning you can have different strategies for the priority levels based on the curtailment scenario that you are running.
​

When a demand response activation is received you can be confident that the Energy Advisor Load Control module will curtail your load according to your curtailment strategy and notify any chosen staff of the DR activation via email/SMS messaging. You'll also be able to track your curtailment progress as the real time load is displayed visually along with your DR target. Demand Response Activation and curtailment status are clearly indicated on the display.  Need multiple DR control strategies? No problem configure multiple curtailment strategies based on a variety of activations.

Many electricity markets experience volatility in pricing and running unnecessary loads during high priced periods can be extremely costly.  The Energy Advisor Load Control module allows for the curtailment of loads (according to a variety of strategies) based on the real time electricity market price fluctuations.  Once a price point meets your configured target(s), key staff can be notified of pending curtailment via email/SMS message and on screen alarming.  Reduction of load according to your strategy is displayed in real time along with the current electricity price information.  Once the price returns to acceptable levels, a clear notification is sent and load can be restored.
​

In some electricity markets, customers are charged fees based on how much load they are running during the times of power system peaks. In Ontario this program is called the Industrial Conservation Initiative (ICI) and in the PML electricity market it's referred to as 5CP.  Both programs provide the opportunity for power users to reduce consumption during system peak times in order to reduce the charges associated with coincidental peaks.  The Energy Advisor GA/5CP module allows customers to monitor the system peaks in near real time and predict when the system load is high enough to possibly reach a new peak.  Throughout the year 5 peaks are recorded as the highest system peaks and the customer is charged based on their what their load was at those times.

The load control module allows customers to activate a curtailment strategy when there is a potential for a new system peak to occur, thereby reducing their load significantly and reducing associated charges.  A unique curtailment strategy can be configured for this purpose.
Request more information!